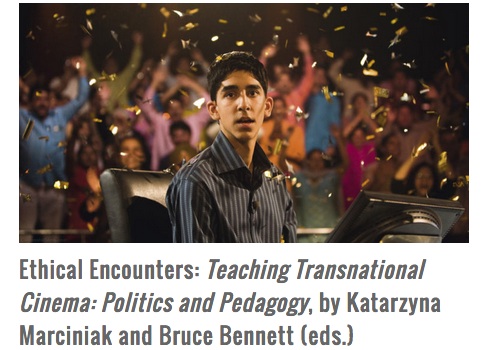 “In the context of incessant war and war-rhetoric, state-sanctioned torture, refugee crises, fear of terrorism, and increasing animosity toward immigrants and those deemed to be foreigners, teaching international – and specifically transnational – cinema can be crucial to disclosing and resisting global violence. But why transnational cinema in particular? The editors of Teaching Transnational Cinema: Politics and Pedagogy define transnational as “transformations in advanced capitalist societies that reconfigure traditional boundaries of national economies, identities, and cultures. Reflecting on such films as Angela Maccarone’s Unveiled (2005, Germany), Atom Egoyan’s Ararat (2002, France), Danny Boyle’s Slumdog Millionaire (2008, UK), and Michael Haneke’s Caché (2005, France/Austria), the contributors to this anthology – nearly all of whom have instructed cinema courses – reflect on the pedagogical, theoretical and personal challenges of teaching such films. The book is divided into three parts: “Seeing ‘the world’ through film”, “Transnational Encounters” and “Transnational Aporias”. A central question posed by the editors is how can we ethically use the figure of the foreigner in teaching transnational film and media. While this book directly addresses a very specific venue—namely the transnational cinema classroom—the application of its call for accountability and openness is productive not only for all academic disciplines, but also in all encounters with transnational art.” Read More Honored to be part of this timely collection.